There are a lot of places to eat on the Canton Street strip in Roswell, which means there is a lot of competition for our dining dollars. Restaurants need to bring their “A-Game” every night or they won’t last. Tonight, Date Night hits a place that does not seem to be firing on all cylinders.

Mac McGee’s is an Irish pub located near the beginning of the Canton Street fun. It has been open for about 6 months and, as you will see, they already have a new menu. There is another location in Decatur that gets good reviews, which makes us want to try this one. We are joined tonight by Rock Chick Diane and her husband John, both chiropractors who have wanted to share the Date Night fun for some time now. This should be a “well-adjusted” meal. (Is this the funniest blog on the internet or what?)

We start out with beers. There is an impressive beer list with about 24 on tap Diane and I order Wild Heaven Invocation, which has always been my favorite beer from this Decatur brewery.

Eve goes with the new pumpkin seasonal from Terrapin.

It’s hard to tell from the photo, but the beer arrives in an 8-ounce glass, even though it’s only 6.1% ABV. It should be in a pint glass. We inquire with our waiter Sean, who promises to ask the bartender what is going on.

Meanwhile, while we wait for a ruling on the beer, we order appetizers.

John goes for the beet salad, which looks nothing like the beet salad that Diane ate here two weeks ago. Sean blames this on the new menu, which just came out this week. The salad must have been good because John orders another one.

Here’s a look at Chicken 65, a spy chicken app that comes with a cooling yogurt dip. Nobody is sure what the “65” stands for, but get ready for some heat if you order this.

We go for the sausage in puff pastry. It’s supposed to come with a mustard beer sauce, but this is not brought to the table. That is blamed on the new menu as well.

Sean returns with 8 more ounces of beer and informs us that we are correct and the bartenders screwed up. He should have brought a whole pint, but I digress…

While we eat our appetizers, let’s mention how loud it is inside Mac’s. Wood floors and a wood ceiling make for a cacophony of sound. It’s so loud that you can barely hear the person across the table, so if you want intimate conversation on your date, this is probably not the place to go.

John and I both order corned beef, because what is more Irish than this dish? The slabs of meat are cut thick and the potatoes along with the kale and cabbage slaw make this a very filling meal. Half of this comes home and is made into a hash with eggs the next day.

I also order some Guinness beer bread as I am a sucker for Irish soda bread. Unfortunately, this bread is dried out and not very good. Further inspection shows that they burned the top, which is probably why it is so dry. After everything that has gone wrong tonight, I don’t have the energy to complain.

Diane gets the mushroom tart and we all taste it. There’s goat cheese in there with the ‘shrooms. It’s really good and perhaps the best dish of the three ordered.

Eve wants something a little lighter and orders the chicken and Brie sandwich with fries. Astute diners will notice it comes on a bun from Holeman and Finch. There’s a huge piece of chicken inside and she gives me half.

We’ve ordered a lot of food tonight and there is no room for dessert. As we leave, the Roswell strip is packed with people. This is one happening area on Friday nights. 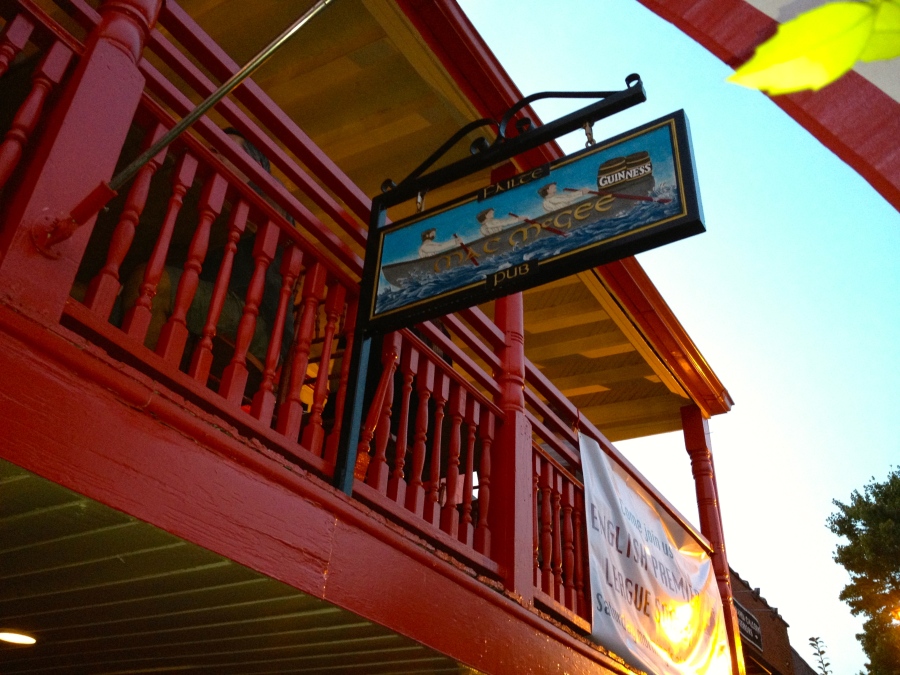 The bottom line on Mac McGee’s: They have one of the best beer lists in the vicinity, so go here for drinks before you go somewhere else for dinner. The noise volume is too high to spend long amounts of date time here. We felt like they didn’t have their act together tonight. There are many other places in Roswell whose dinner service is so much better than this. Mac’s can do better, and they should, or they won’t be around for long.