Allagash Brewery has always been a Date Night favorite. They have been brewing since 1995, which makes them craft brewing pioneers. Allagash Tripel is one of the finest American Belgian-style beers that we have tasted. When we saw that The Wing was having a dinner featuring Allagash, we had to buy tickets immediately. 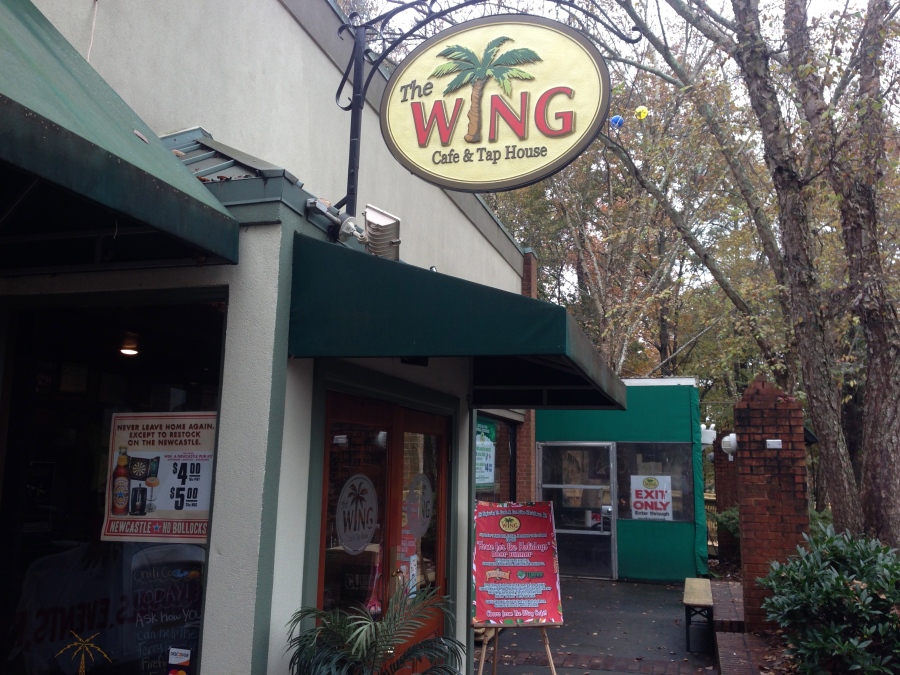 The Wing is located about 2 miles from Date Night Headquarters in Marietta, making this a great location for us. My band has rocked The Wing a few times, and we are very familiar with their menu. They used to be a Wild Wing, but they wanted to branch out from the Wild Wing menu, so they dropped the franchise and went out on their own.

We are joined tonight by about 60 people that we don’t know and two that we do, Date Night regulars Claudia and Randy, who last appeared on Date Night at the Monday Night Brewery and Osteria Figo (Date Night #88, 10/18/13). Also at our table are Spencer and Al, who are drinking Coors Light when we arrive. That’s a funny choice for two guys who are about to drink some really good beer.

Fortunately, the back patio is heated because it’s a cold night. The first beer out is cold as well. 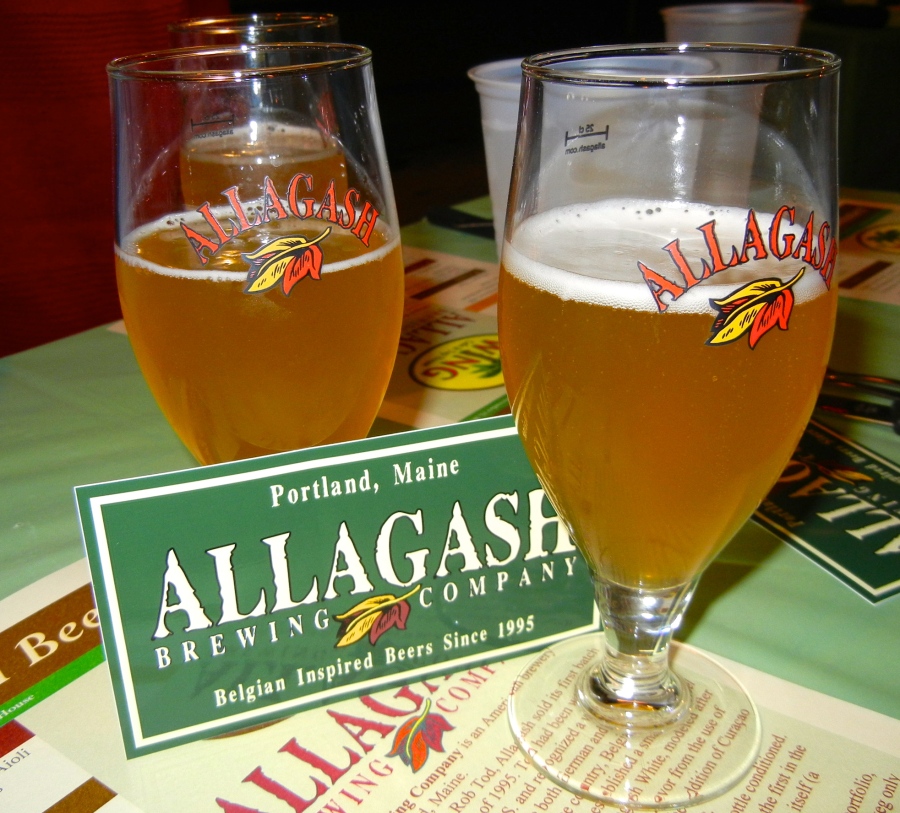 It’s an Allagash White (5% ABV), which makes up 80% of their beer sales. We know this because there is an Allagash guy here from Maine who has come to tell us about each beer we are drinking tonight. Since Allagash White has hints of orange and lemon inside, it’s paired with some seafood.

The lobster roll features nice-sized pieces of lobster. I am hungry and I eat the whole thing. I wish I had eaten only part of the bread as we have a lot of food before us. We also have a lot of beer to drink.

The next beer is the Allagash Four. It’s a very potent quad at 10%. It’s a dark beer that is best sipped in small amounts due to the high alcohol content. We need some pork with this big beer.

The apple-cured pork tenderloin comes from the butcher shop next to The Wing. It comes on a biscuit with apple butter. It’s an excellent accompaniment to the Allagash Four. The hits keep on coming with the next offering. 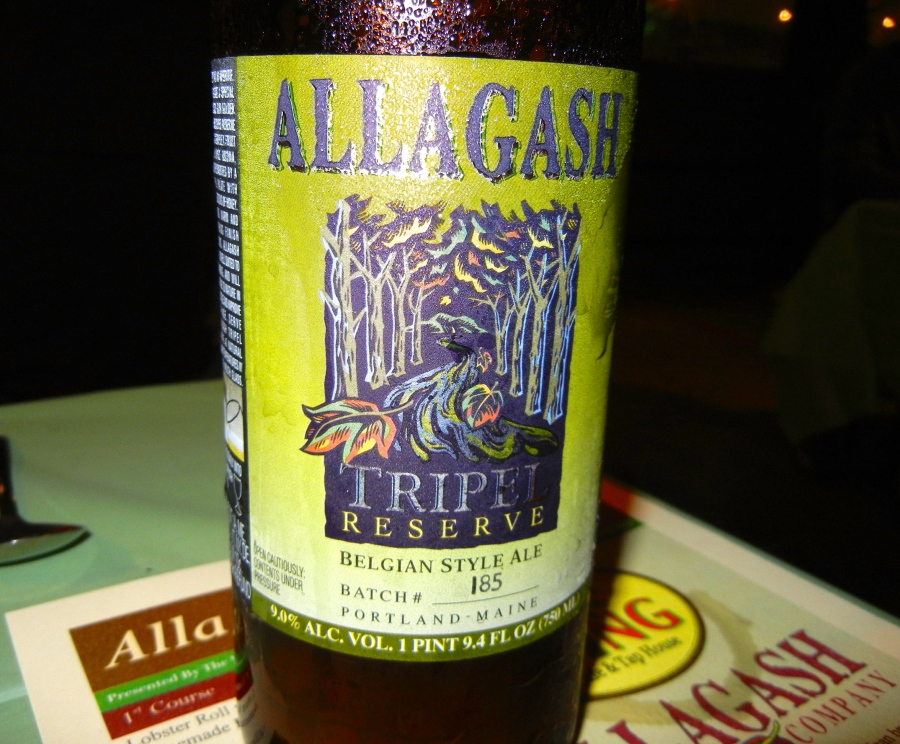 The Allagash Tripel (9% ABV) has always been our favorite Allagash beer and one we love to see on beer menus. It may not be our favorite after tonight because it’s up against some incredible competition. With the tripel comes a salmon dish. 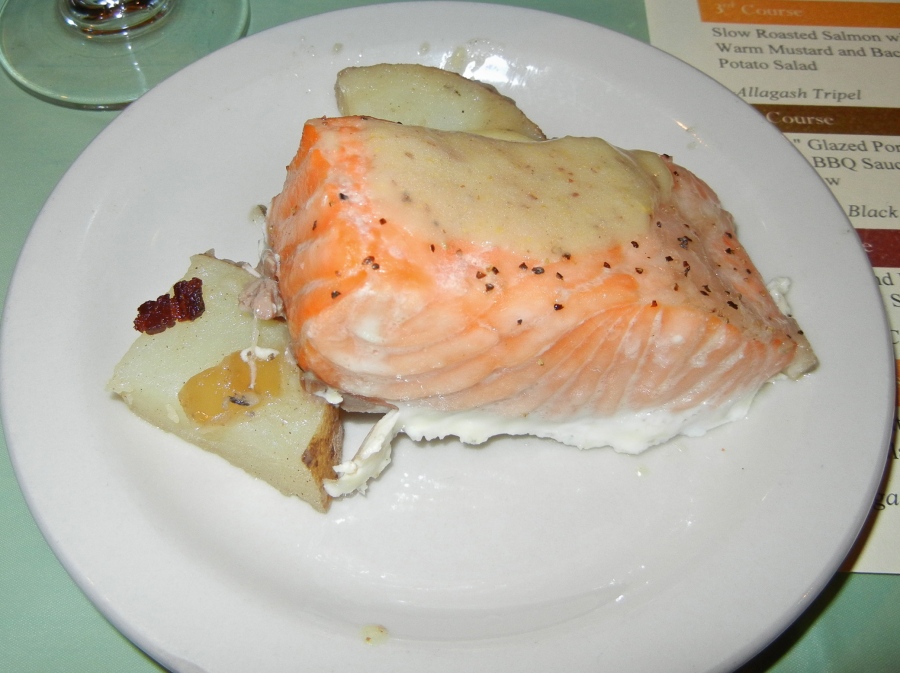 It’s slow-roasted and comes with a side of bacon potato salad. The salmon is moist and cooked to medium. And with bacon in your potato salad, you can’t go wrong. Nor can you go wrong with our next beer.

The Allagash Black is only 7% ABV, which makes it pale in comparison to our two previous big beers. This beer can be consumed in larger quantities because of the lower alcohol content. It comes with ribs.

“Black” ribs to be exact, with “black” sauce and apple cider slaw. Get the dark connection here? Another great pairing, both for the eyes and for the mouth. Next, the knockout punch. 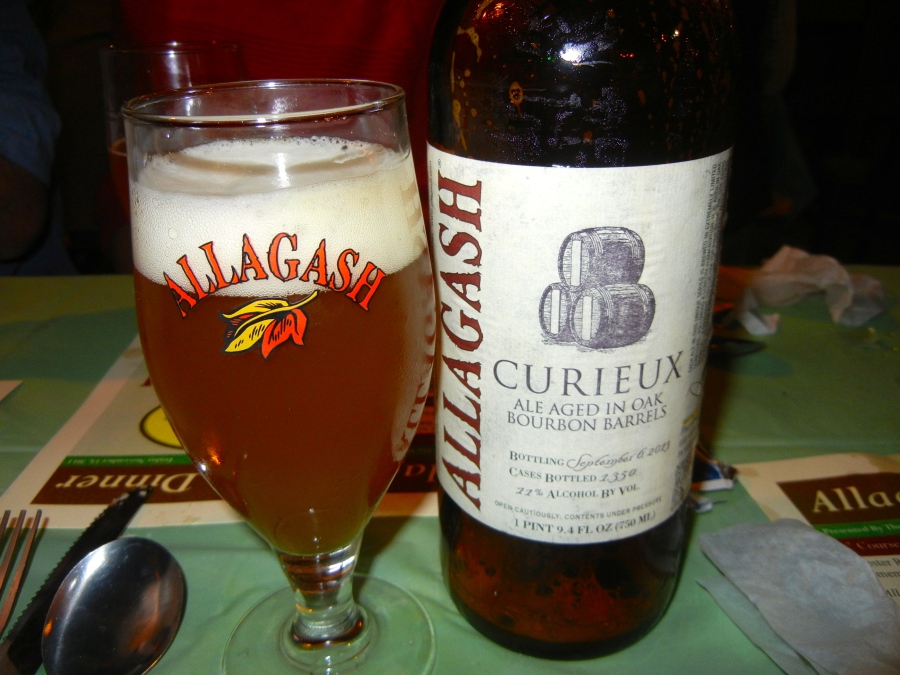 The Allagash Courieux has 11% ABV and is the strongest beer we drink tonight. It’s aged in Jim Beam bourbon barrels, and the bourbon’s taste and alcohol content infuse into the beer. This makes the beer so strong that they have to add the 9% Tripel to cut back the alcohol. This is an incredible beer, and if you ever see it on a menu, order it. We have got to find it at Hop City, our favorite beer store. Paired with the big beer is a big bowl of beef.

We each get a bowl of New England Boiled Beef with horseradish sauce on the side. Unfortunately, this goes mostly uneaten because we are too full of beer and the four previous courses. There’s got to be a little room left because we have dessert and two more beers to go.

The apple fritters come with a maple syrup glaze. They are warm, sweet and crispy with a good amount of crunch. There is one more beer left, which is not on our menu.

The Mattina Rossa (6.9% ABV) was brewed in 2008, which makes it rare and 5 years old. It’s very fruity, but sweeter than the Brett. It’s too fruity for me as I again compared it to the Courieux.

Three hours after it started, a great night at The Wing comes to an end. Don’t worry–we do not drive home tonight. An Uber car comes to get us and takes the happy campers home to sleep off some amazing beer.

The Bottom Line on The Wing’s Allagash Dinner: This is the largest beer dinner we have attended. You lose some intimacy in the big crowd, but the servers did a good job keeping food on the table and beer in our glasses. They almost did too good of a job as it takes a long time to drink these high alcohol beers and the next one tended to come out before we finished the previous one. These are not beers for chugging. The Wing does these dinners about once a month. If they are featuring a beer you like, we suggest you buy some tickets.