What does $1.9 million buy you near downtown Decatur? How about a really nice brewery?

Date Night starts out about a mile from the square in Decatur. We have been wanting to try Three Taverns, and you should too. It’s the only Belgian-style brewery in the southeast, which makes it unique to the area. Their beers are quite tasty too.

We do not remember to take any pictures inside of the tasting room. It must be the excitement and the beer. They have three on tap today as their spring seasonal is not ready and they are out of their winter Russian stout. The tasting room is paneled in up-cycled wood that they reclaimed from old barns. Believe us when we tell you that it looks very nice. The brewmaster is from Belgium. Imagine that, a Belgian making Belgian beer! We taste the following:
Single Intent: A single, which makes it a light-bodied beer. This is the one you can drink every day.
Night In Brussels IPA: A Belgian IPA that’s hoppy, yet finishes with the taste of citrus.
White Hops: Same grapefruit-y taste as the IPA, but this one is cloudier like a wheat beer and lower in alcohol.
They are about to introduce a quad for spring that we eagerly await.

All this beer is making us hungry, and after the tasting, we walk (no driving after a brewery tour!) less than a mile to Church Street and the Victory Sandwich Bar.

It’s a cool old building with a hip new vibe. 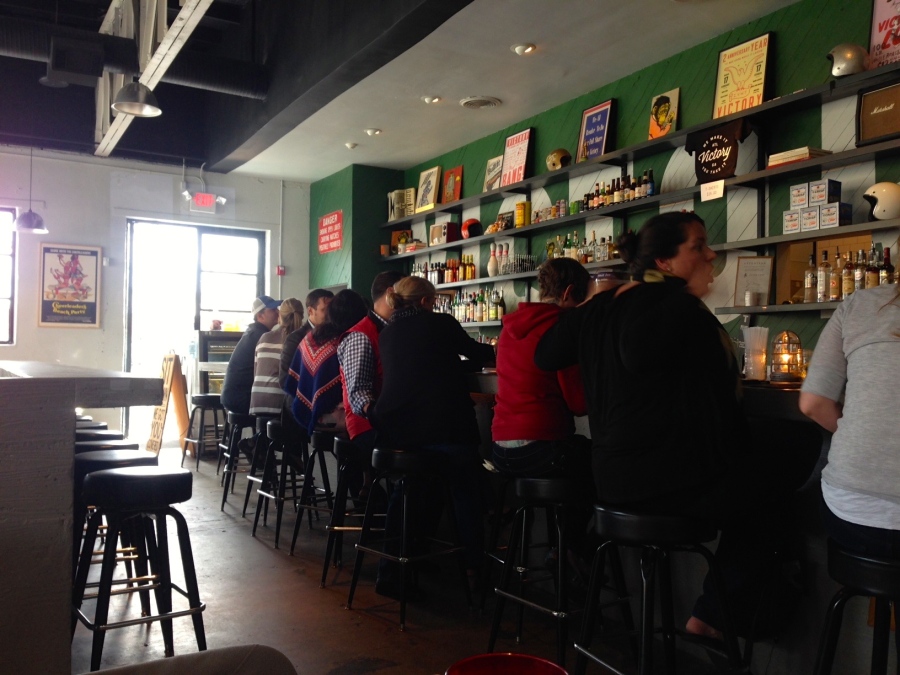 Secret room alert: We love secret rooms and Victory has one in the back. We pop our head in to look, and what we find will be the subject of a future Date NIght.

We have had our fill of good beer tonight, and Victory has a drink that the regulars can’t get enough of. 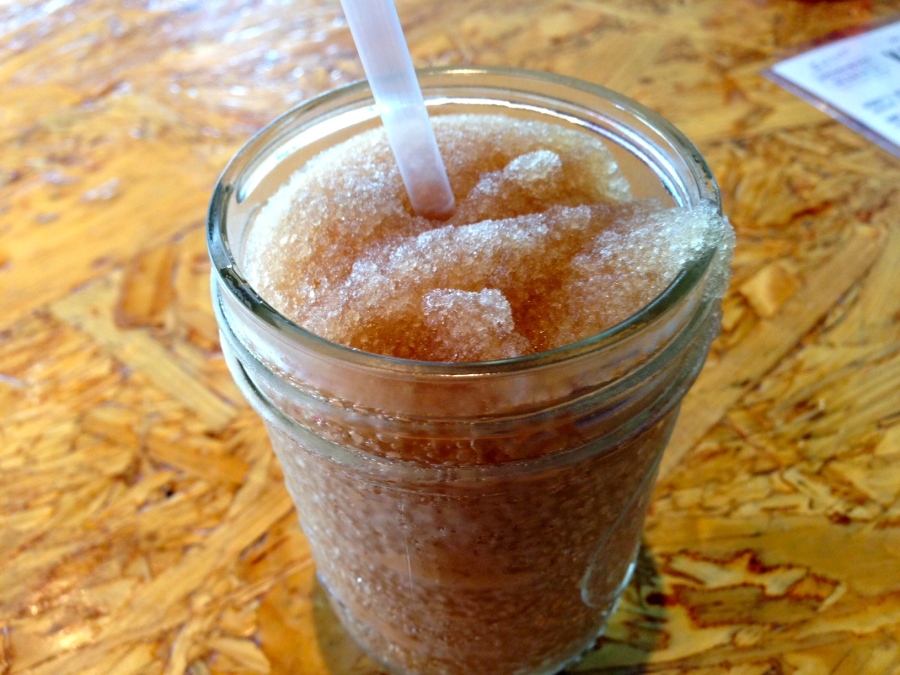 The Jack and Coke slushie is exactly as advertised. You can taste the Jack in there. After all that beer, we can only split a small, which gives us both a good sample of the drink. At $4, it’s a fun drink to order. The large ($8) comes in a mason jar twice the size.

While we figure out what to order, we get a bowl of the popcorn of the day from the “snacks” portion of the menu. You can see the spice on top. The popcorn has quite the kick, which keeps us reaching for our water glasses.

All sandwiches are $4, which makes them quite the bargain. They are small, which means you might want to order two, depending on how hungry you are.

We each order one of the ten on the menu. Eve gets the Mile High Club, a combo of turkey, bacon, ham, avocado and cheese. The sandwich is meaty and a small eater could probably make this one a meal. The flavors in the sandwich make this much more than an ordinary club sandwich. 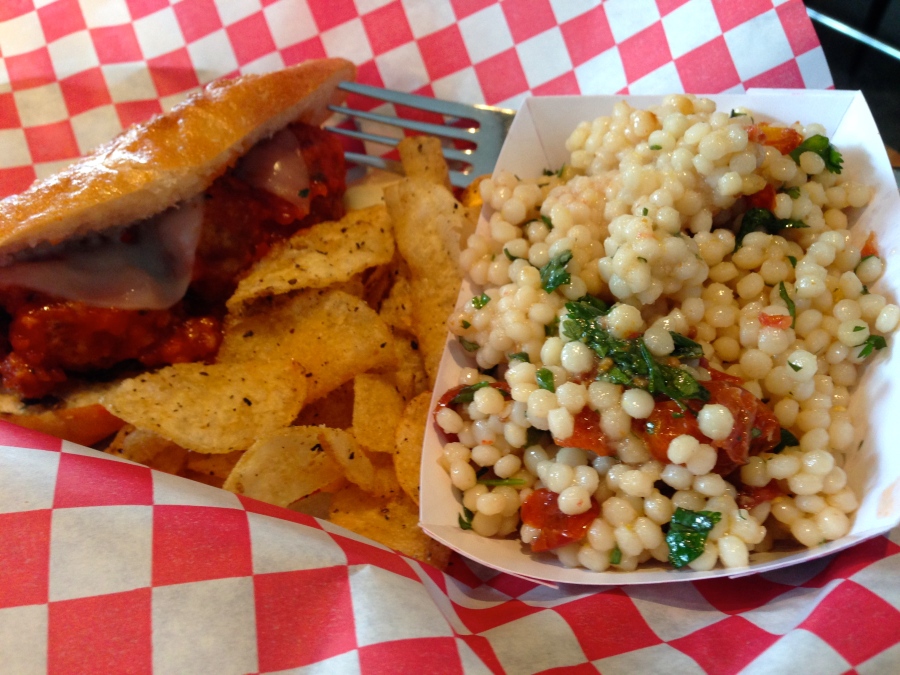 My sandwich is not as substantial. The Super Mario is a meatball sandwich, with black olive tapenade on the bread. I order a side of pearl couscous, which may be better than the sandwich. The white balsamic vinegar dressing on the couscous is delicious and imparts a wonderful citrus taste into the side.

We haven’t had a ton of food, which leaves room for dessert. 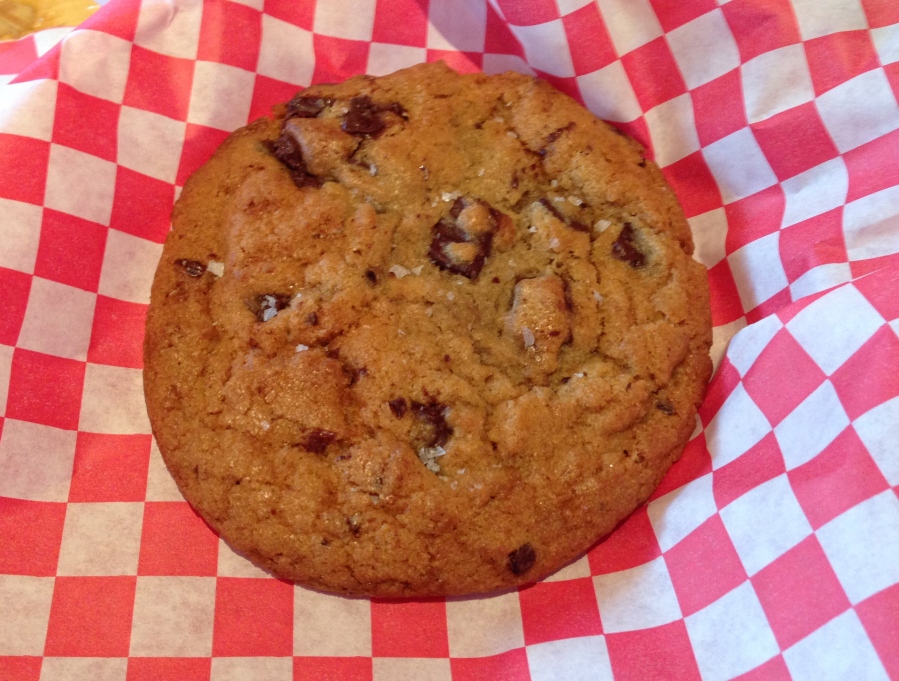 The chocolate chip sea salt cookie comes with warm, melting chocolate chips. You can see the salt on the cookie. The taste of the salty with the sweetness of the chips wakes up many of the taste buds. It’s a fun, simple dessert for a nice, inexpensive meal. The two of us eat for under $25, which for a creative meal like this is very reasonable.

As we leave, I spy an old Honda 70 propped up against the wall, which runs well, but needs a new battery. I had one of these as a teenager in the early 1970’s (mine was green). What a great trip down memory lane.

The bottom line on Victory Sandwich: It’s fun, it’s hip, and it’s cheap. You could order two sandwiches, a side, and a Jack and Coke and spend around $16 for a lot of food. And there’s a secret room in the back. Date Night is looking forward to coming back and checking it out.