Eve’s school is in the NCAA basketball tourney and Date Night needs a place to go to watch with some University at Albany (NY) alumni. Where should we go? You may remember our sports bar shootout, which pitted the Cumberland T. Mac against the World of Beer in Kennesaw. For those of you who didn’t read it, World of Beer barely won, but T. Mac had the better TV setup and beer selection. So it’s off to T. Mac we go for some March Madness.

There are T. Macs everywhere. Their rebranding from Taco Mac continues, but that will probably take a while because changing all of those signs is a project that we would not want to manage.

We promise you beer, and they have over 100 on tap. 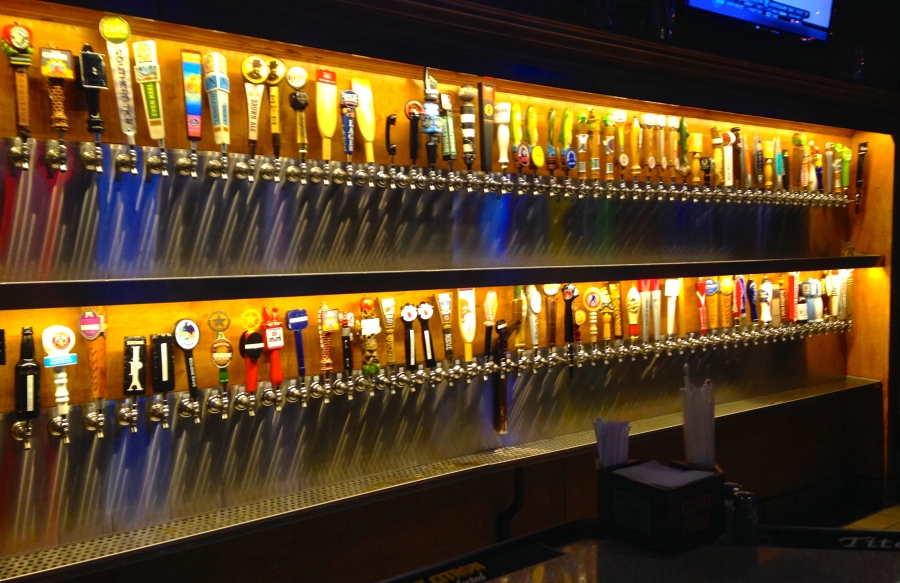 Isn’t this a beer lover’s dream? It’s hard to decide. We go big, Belgian and local, because that’s what we like. 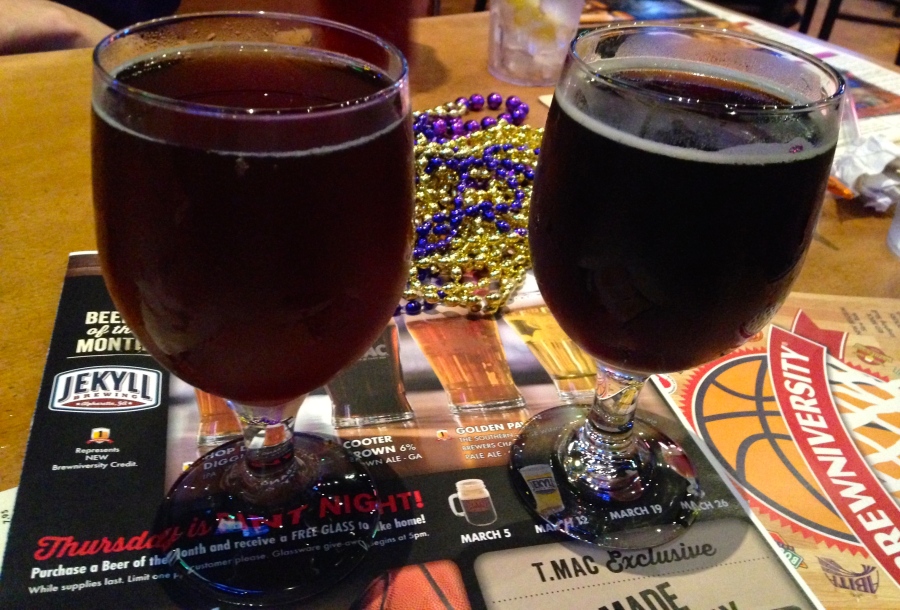 Eve goes for the Reformation Cadence dubbel, made right down the road in Woodstock. I see her dubbel and double it, getting the Wild Heaven Eschaton quad from Avondale Estates. Both are full of alcohol and will be the only two beers we drink during the whole game. It’s a miracle of brewing that two local breweries can put out beers this good.

Before the game starts, we get an appetizer.

The spinach and artichoke dip is probably the best thing we eat all night. It’s hot and served with warm pita points and some tortilla chips. The chip to dip ratio is excellent as we like it when the dip runs out before the chips.

There are TVs everywhere, and on a night like this, you want to watch every game. 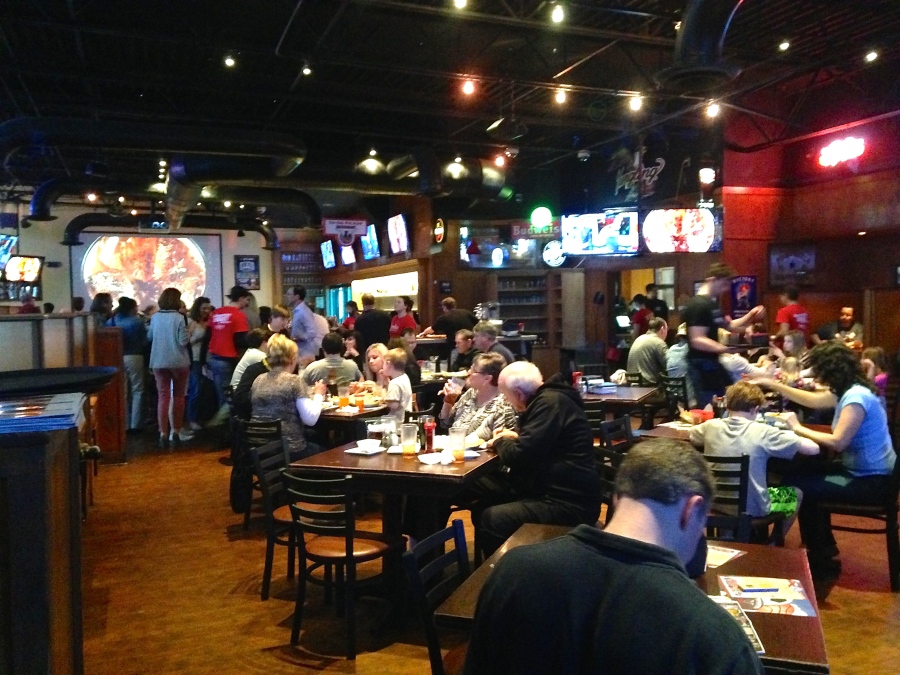 Our game starts a little late, and they put it on the big screen for us. After all, there are 15 fans cheering for Albany, the most of any school tonight. 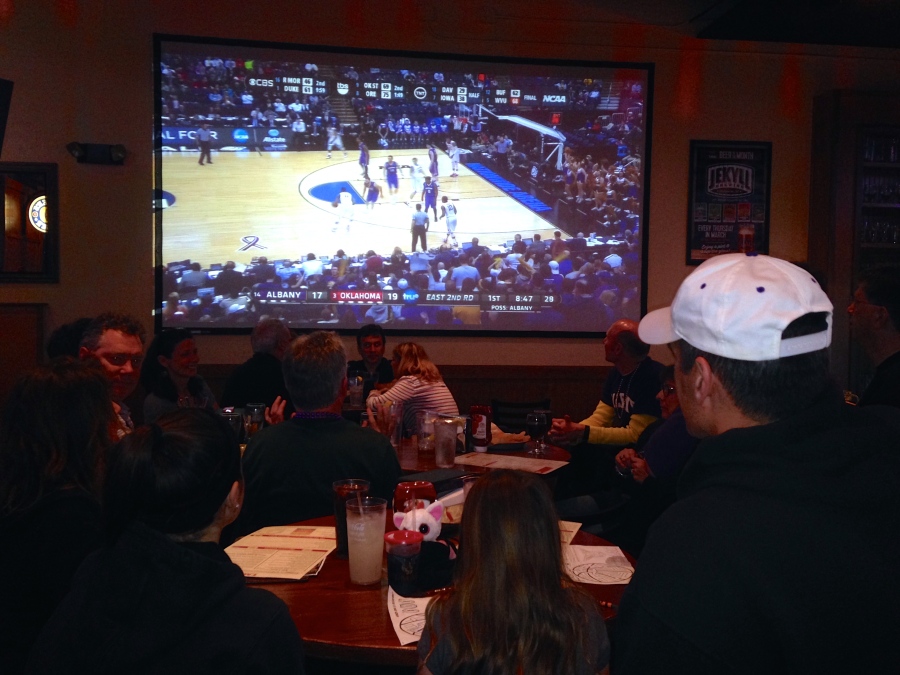 While the game plays out, we order some dinner. First out is a turkey burger with a side of roasted mushrooms.

It’s OK–nothing outstanding. The turkey burgers are much better at Moxie Burger, who we feel has the best turkey burger in town. I’m pretty sure that’s a frozen patty in there because of it’s uniform, puck-like consistency. The mushrooms are the highlight of the dish. I give some to Eve, who puts them in her chicken cobb salad, the fail of the evening. 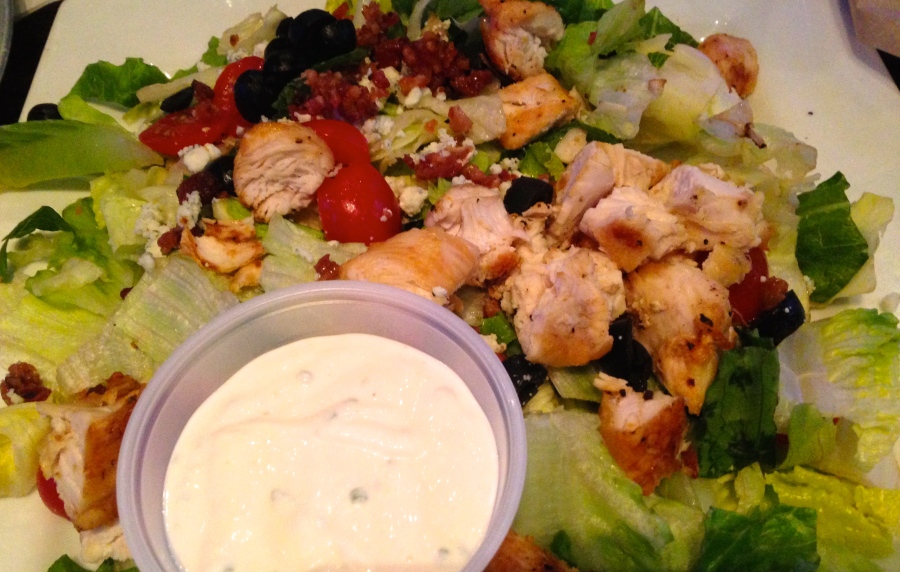 This pitiful pile of lettuce is supposed to have egg and avocado in it, which would have made it a lot better. It is served without either. After Eve and another woman in our party are almost done with their salads, they realize the two ingredients are missing. By then, it’s too late to send them back. Who let these get out of the kitchen looking this way? Since salads don’t require any cooking, you would think this is the last thing they would screw up.

In case you were wondering, Albany lost to Oklahoma. The Sooners were too big and too strong for the Great Danes.

The bottom line on T. Mac Roswell: Go for the beer and the sports on TV, but you might as well eat somewhere else first. The staff is full of beer people that know their brews. Our waitress nailed a beer recommendation when someone was overwhelmed by the draft menu. But here’s the rub: the food here just isn’t very good. Everything is average, just as you would expect from a large chain that might as well be the Red Lobster/Olive Garden of sports bars. Eve’s salad was way below average. Coincidentally, our son was at the T. Mac in Buckhead on the same night and said, “The food wasn’t very good.” They need to throw out their menu and start over. They certainly couldn’t do much worse than the food they serve now.