One of the perks of being blogging celebrities is that Date Night gets invited to a lot of interesting food-related events. Believe it or not, we turn most of them down. Something that caught our eye a few weeks back was an invite to Lauren Patrick’s house for an Atlanta Food Bloggers Society dinner featuring dishes made with NaturAlmond almond butter and Georgia Grinders cashew and peanut butter. Lauren is pretty, she’s southern, she’s a fellow Georgia Grady Dog, and she writes the always-entertaining (and sometimes controversial) Pretty Southern lifestyle blog. We accepted immediately.

Better yet, the “big boss lady” of NaturAlmond is cooking tonight’s meal. Jaime Foster started her company in 2011 as a vehicle to sell her grandfather’s almond butter recipe. The company has recently expanded, adding the Georgia Grinders peanut butter and cashew butter lines. Jaime gets her almonds from California and her peanuts from south Georgia. We love local products from local companies.

That’s Jaime on the right along with the “Princess of PR”, Debbie Rosen of The Rosen Group in Atlanta. Lauren is photo-bombing in the background.

But enough with the introductions. We are here to eat and, as you will see, we are about to eat well. We are served two appetizers.

Things start off with baked brie in a pastry crust. Jaime covers a brie wheel with almond butter and jam, and wraps it up in a pastry dough. I could have eaten the whole thing, but I had to be nice and share with others. What a great dish to put out before a dinner party.

I shared the almond butter stuffed dates too.

Did someone say “bacon”? Jaime stuffs dates with goat cheese and almond butter and wraps them in bacon. Did you know that in a 2010 poll, 43% of Canadian men surveyed said that they would rather eat bacon than have sex? You read that here first. These are just as good as the brie, although the cheese dish is probably easier to make.

Nut butters are not just for appetizers. Wait until you see the main course, eclipsed only by the desserts! The salmon is delicious.

It’s topped with almond butter and a panko-sesame crust. It’s moist and delicious. As a side dish, Jaime prepares orzo and vegetable salad.

The dressing is made with chicken stock and cashew butter. Unless you saw the recipe, you would never know there was cashew butter in the orzo.

My favorite dish of the night is the chocolate chip cheesecake.

There is a whole jar of almond butter and three packages of cream cheese in the recipe. Sure, there’s a lot of calories in there, but guilty pleasures are sometimes the best pleasures. 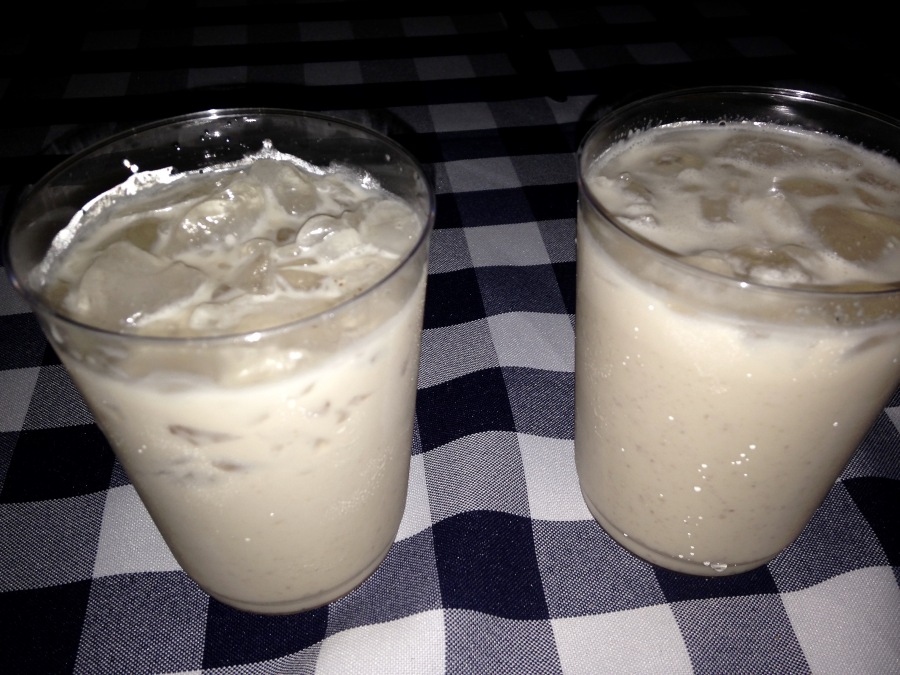 Have you ever watched “Chopped” on the Food Network where the chef makes ice cream, but it never hardens? That’s what happened to Jaime’s recipe this time. No worries–she adds vodka and kahluha to make the perfect after-dinner drink. It tastes like a boozy shake that you can get in various spots around town, only better. That’s because you can taste the booze in this drink, whereas we wondered where it was in the few that we have tried.

What we learned: Nut butter is not just for sandwiches anymore. You can buy the good stuff at Whole Foods. Yes, it costs more, but you are worth it. And it makes you feel good to support a local merchant, so do it!

Disclosure time: This was a media dinner and Date Night did not pay for any of the NaturAlmond/Georgia Grown products mentioned in this post. Our words, however, are priceless. Thanks to Debbie Rosen for the invitation, Lauren Patrick for hosting the shindig, and Jamie Foster for being such a wonderful chef.