Tonight, Date Night eats some bison and drinks some beer. Red Hare beer, to be precise. We are at Ted’s Montana Grill in East Cobb, a mere buffalo cow chip toss from Date Night Headquarters. Eve got notice of the event in an email, and the next thing you know, we were registered for the 5-course beer dinner.

Red Hare is our “home-town” brewery as they are based in Marietta. We don’t get over there as much as we probably should, but we have been known to order a Sticky Stout or a Watership Brown on occasion. Brewery managing partner Roger Davis and his wife Bertha are at our table, so we are able to get the scoop on all of the doings at Red Hare.

There’s a lot of food tonight, and just the right amount of beer. There’s not too much, and most of it is low-alcohol, so we don’t have to Uber home. Let’s get started with some bison nachos.

The nachos are paired with Red Hare’s Gangway IPA, a hoppy beer. We are not IPA people, but when it’s paired with something spicy, it takes some of the bitterness out of the beer. The bison chili is excellent and the pepper jack cheese is not too spicy. If you want to cut out the chips, you can get the chili on top of a burger.

Did someone say burgers? Course two is exactly that:

Isn’t it cute? The bison slider is mini-sized, but it is cooked to the perfect pink inside. A word about the fries–they cut fresh them right here. Nothing frozen hits the fryer. The beer pairing is our favorite of the night, the Long Day Lager. There’s lots of malt in the lager and we could have consumed a lot of this beer.

However, there’s too much food coming to fill up on beer! Our next course is the bison short ribs.

They have been slow-cooking these all day. They are tender and juicy. Paired with the ribs is Soft J IPA, which is a hazy IPA. It’s also the highest-alcohol beer (6.8%, although rumor has it that it’s above that) that we have tonight. Soft J has more citrus in it, which apparently the millennials can’t get enough of.

My date is starting to get full, but there’s still two more courses to go. She gets a box and puts half our our next course inside.

This is bison filet. I try to set some aside, but it’s so good that I finish my whole plate. And every spear of asparagus. I don’t know what Ted’s does to their asparagus. It’s got a little salt, a little oil, and maybe a little crack cocaine because once you start eating them, you just want more. The filet is accompanied by Gem City Classic, which could be described as “Long Day Lager Lite”. You don’t want anything too heavy to compete with your bison filets.

We have one more course to go. Is there room? There’s always room for dessert! 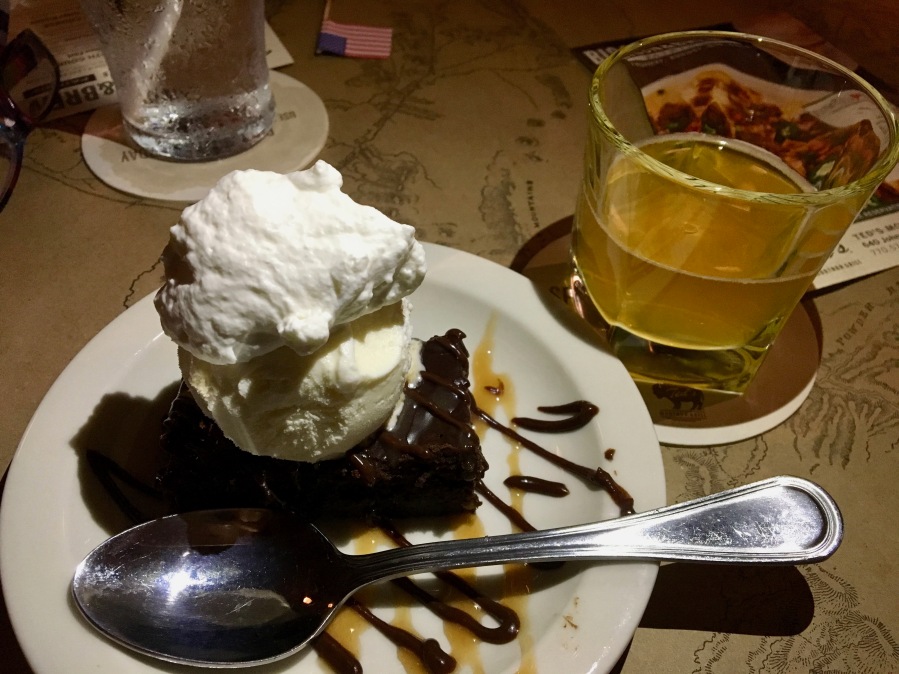 The Kahlua Fudge Brownie is topped with ice cream and whipped cream. Eve doesn’t take any of it home (full disclosure–I may have eaten the last few bites). This is a big slab of chocolate goodness. It comes with SPF 50/50, which is currently Red Hare’s biggest seller. It’s a summer beer that is half Gangway IPA and half tangerine soda that is made at the brewery. It’s a fruity way to end our special beer dinner.

Our favorite course is the bison filet. Eve liked the Gem City Classic beer the best, and I liked the Long Day Lager.

Before we go, a special shout-out to the staff at Ted’s, who kept the food coming and the beer flowing all night. It’s hard to serve 25 diners at the same time, and when you throw in a 5-course meal, that’s 125 plates and 125 glasses of beer for the whole event.  That’s a lot of food to serve hot and properly prepared, and Ted’s met the challenge, making it look so easy.