Happy New Year to all of our readers! For our first date of 2017, we let the good times roll into the northern end of Canton Street, where we try to conjure up some Bourbon Street at Adele’s. 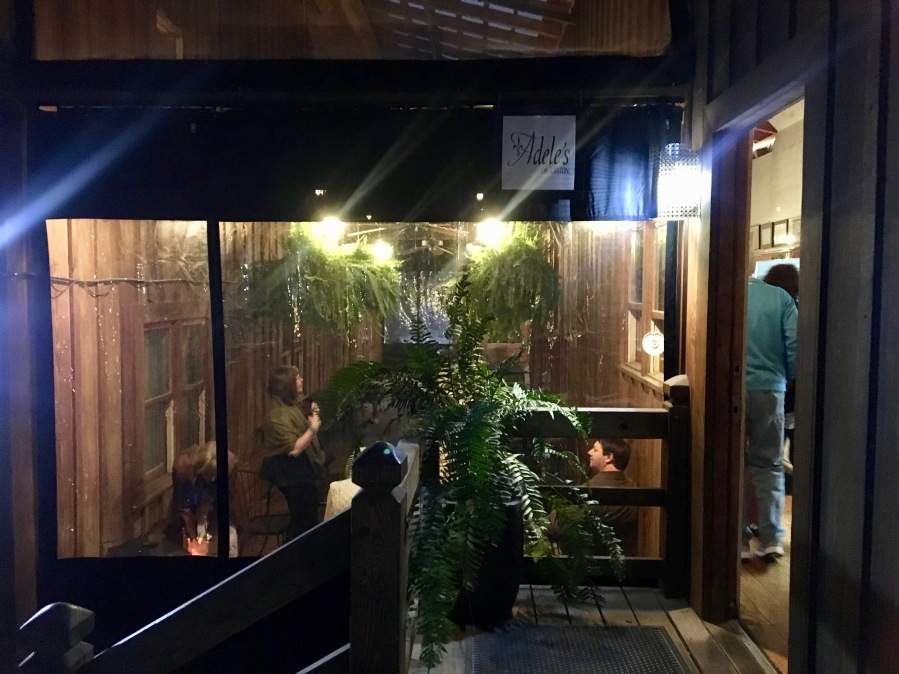 It’s a pretty dark building and set back off of the road a bit, so you might have a little trouble finding it. Adele’s is the creation of Chef Marc Wegman, who was born and raised in New Orleans. He’s got a Cajun cooking background, so he should have the chops to open his own place.

There are two dining areas.

The indoor area looks empty, but it turns out the empty tables are all reserved. We wind up at their outdoor atrium, which fortunately is heated.

We are joined tonight by our “East Cobb Eating Society” pals Stephanie and Bill, who we go out with about once a month. Customarily, we start out with some beers.

They have Abita on tap, but it’s too hoppy. I find a Monday Night Drafty Kilt, and Eve goes with the Abita TurboDog. Someone should be drinking good Louisiana beer with their Cajun food.

When you walk in, they have the daily specials posted on a chalkboard in the dining room. Each couple tries a different appetizer. Our dinner “dates” go with the calamari. 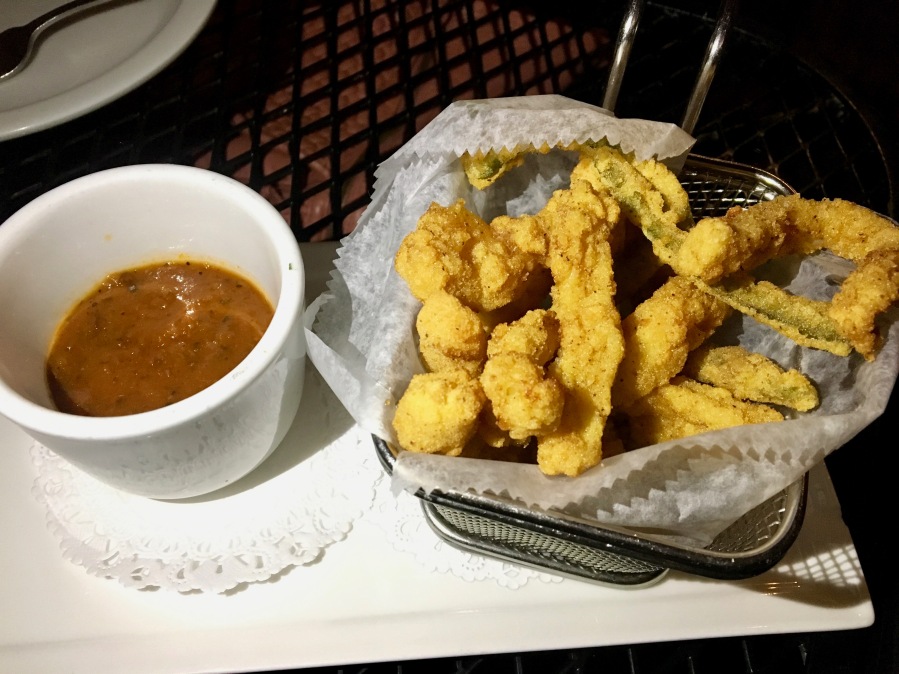 They don’t cut the squid up into the traditional rings. Instead, they fry the entire leg lengthwise. The calamari is good, but it’s not crisp enough. You can’t tell from the picture, but this is a small basket of calamari.

Our server tells us there are four jambalaya balls in an order, so get the dish, figuring we would each have one.

Looks like there are only three to an order, which brings in our “Theory of the Shared Appetizer”: for every even amount of diners, there will be an odd amount of appetizers. Anyway, the balls have a nice Cajun spice to them and you can taste the andouille sausage throughout. Although they should have been crunchier, this is probably the best thing we eat all night. Unfortunately, things start to deteriorate from here.

Our friends get basically the same thing for dinner, which is a bowl of seafood gumbo and a salad.

We do not get a taste of the gumbo, but they both say it is good.

When done right, a Cajun seafood platter can be a beautiful thing. We split the Pick 3 Platter, which lets us choose three from a list of oysters, shrimp, chicken, alligator and catfish. 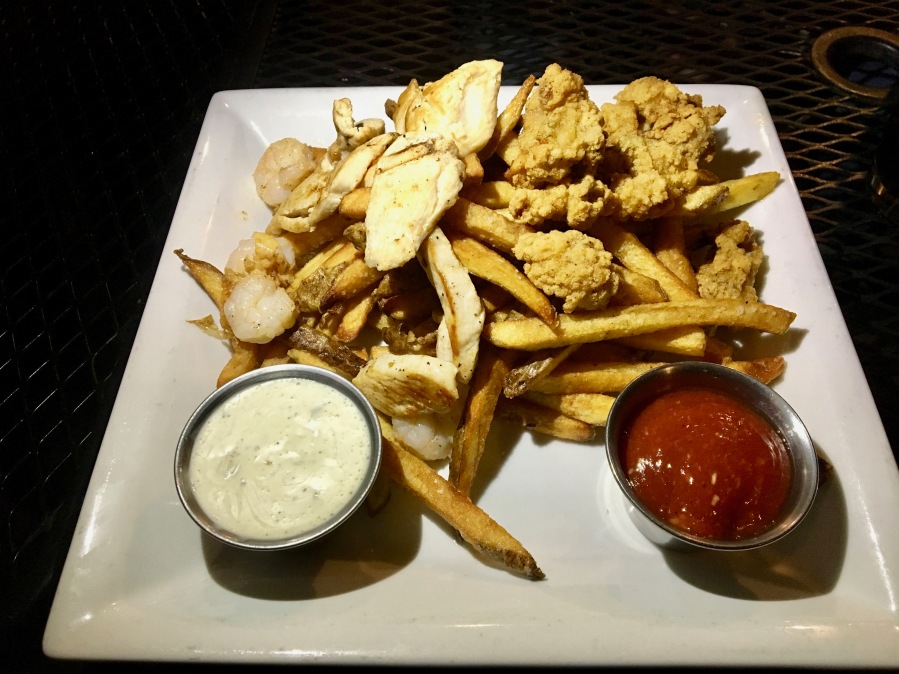 Say hello to a $23 dollar plate of…French fries. We were expecting piles of seafood and got a giant pile of fries. The platter can only be described as a disaster. Look closely, and you will see three grilled shrimp on the platter. Not a bit of Cajun (or any for that matter) spice on them. Look more closely and you will see the grilled chicken. It’s tough, dry, cold, and tastes like shoe leather. (Not that we eat shoe leather, but you get the picture.). The oysters are not crisp. The fries are not either. We get to pick a side dish with it and pick the Manhattan clam chowder, another special from the chalkboard. 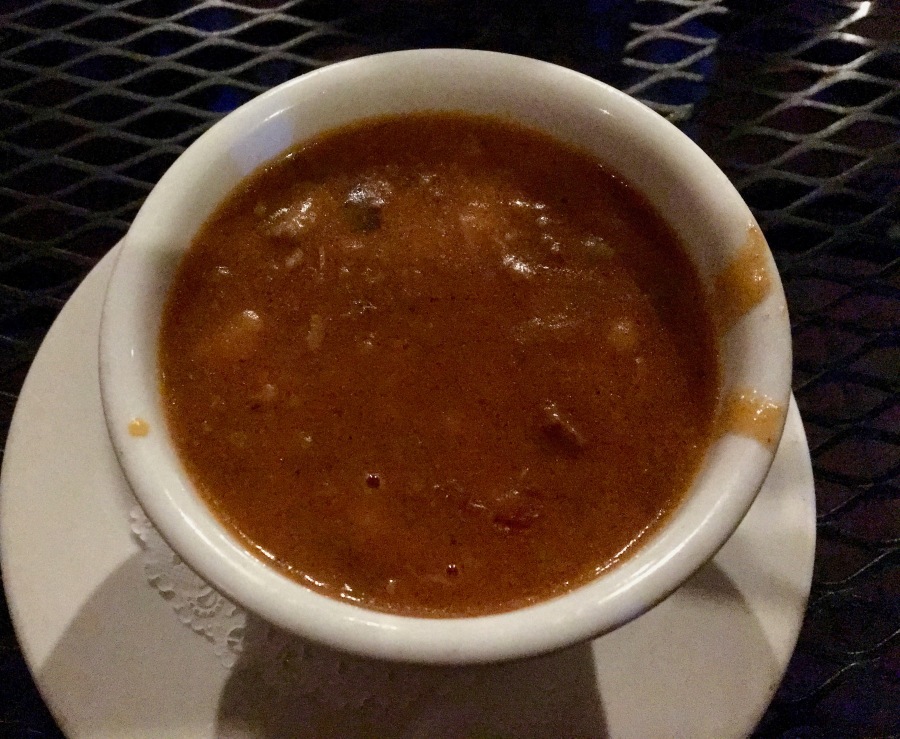 There are hardly any clams and this tastes like a bowl of spicy tomato soup.

Should we send the whole thing back? We would have, but nobody came over to ask if it was all right. Our server, who we can only describe as “harried and not very friendly”, never reappeared after our food was delivered. By the next time we saw her, we had struggled through the dish and she was ready to bring us the check and turn the table.

As I was coming back from the rest room earlier in the evening, I heard another diner complaining to Chef Wegman about the fried oysters. As we were leaving, I decided to complain about the entire seafood platter to the Chef. Much to his credit, the Chef apologized and told me that they were “swamped” tonight. He also said that we should call him, come back, and he would buy us another meal.

The bottom line on Adele’s on Canton: Should we take Chef Wegman up on his offer, or just cut our losses and be done? Leave your opinions below. There is much better seafood available, two doors down at The Big Ketch. And there is much, much better Cajun food available two miles away from our house at AJ’s Seafood. We’re very disappointed that our 2017 dates had to start off on this note.

6 thoughts on “A Disappointing Date at Adele’s”